19th April 2010, Mysore, Karnataka India.
The day dawned bright and clear when we were to leave from Mysore and proceed towards Bangalore. I guess there was a transition when we started out with villages and then made our way to towns and to cities and finally landed to Mumbai. Well we started our day with some Saree shopping. Mysore is famous for its sarees. Since we were to leave early when we went to search for the shops, none of them were open. I guess Mumbaiites are so used to the fast paced life, that w expect shops open as early as 8 and open till 11 at night or even later.So consequently any small city is a slow and sleepy place for us. But it feels very nice not having to rush against the crowd to catch that 9:36 Ladies Special or run for that irregular bus. Finally we found one shop which was open. So we went inside and asked the shopkeeper for something ‘different’ which was not very loud and audacious. After lots of sarees and rejections later we settled for a few and then bargained our way to get a good deal. The shopkeeper had a lot of currency notes which he had framed near the entrance. I really felt like negotiating and taking some of the notes. After that we made our way to the Government silk factory. Here you could also go into the factory and see how the sarees were made. There was also a shop where you could buy sarees. But the sarees here were extremely pricey (=silk sarees authentic and govt recognised=sky high prices) i’m sure the sarees must have been nice but since we(=me,mum n my sister) don’t have many occasions to wear sarees, spending so much was out of question.

Next we decided to pick up some sweets. Mysore is also famous for its sweets. We knew this from prior knowledge. There was this shop we’d seen in the show ‘Highway on My Plate’ hosted by ‘Rocky and Mayur’. I absolutely love watching that show i mean whenever i’m watching it i’m envying their job. Eating and only Eating!!! But the best part is that they give very honest opinions about the food and the ‘Must Haves’ plus they look like foodies not like those half starved models that come and pretend to eat and take minuscule bites. 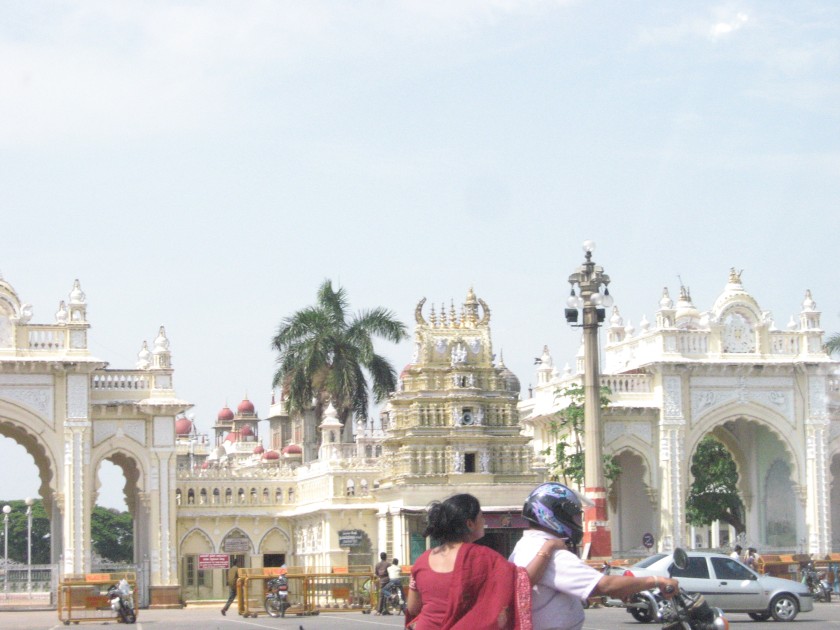 A word of caution, there are as many as 3-4 Bombay Tiffany’s in the boulevard where these shops are located. But finally we found one which Rocky n Mayur visited. We also asked them about this and they said they had just opened shop when they came along camera et al. Without any prior warning!!! So we left with a lot of Mysore Paa which is besan and sugar mixed in Pure Ghee. You can make the difference when you eat, pure ghee has a satiety no other substitute has, We also picked up a mithai that tasted like chocolate fudge. During that time, my dad was busy solving the rubix that we picked up when we went to the Chamundeshwari temple. He got one side right. After that we left for Bnagalore. We’d heard that the next roop of Satya Sai Baba was going to be born somewhere in Srirangapatnam a few kms off Bangalore. So we decided to stop there.
There was one place where they had put up a sign with Baba’s picture on it but it turned out that it was only a school managed by the trust.

Although we spent less time in Mysore, the city made an everlasting impact on our minds. The canopy of trees on every road, the ease of travel, the many palaces so very well maintained, definitely made us want to come again!!!!

Coming Up Next: Srirangapatnam and Sights on the Way

Where we were staying in Mysore.

Wodeyar Circle..that dome is made of real gold.