“Extra Extra Read All About IT”

Yes you heard me right. The BMC, in a most revolutionary way, has taken the BEST services to an entirely NEW Level. Come FLOATUS- the new, lightweight Water Bus service that floats on water. It is rumoured to be able to carry the weight of 200 passengers without sinking an inch.

On the other hand, scientists at the Indian Institute of Science are experimenting to device a form of fire called FIRANI which would light under water.

For more details, Turn to Page 2

Sunstick causes a RAGE!! Mass Buyouts all over the world

We all knew that the Fashionable Kate Middleton left her own legacy cosmetics brand. But now her daughter and heir apparent to the crown has launched her own lipstick called Sunstick. This revitalised new brand brings in qualities of the Sun. Through cutting edge solar absorption research and through solar vehicles orbitting our galaxy, this new lipstick provides the skin some much-needed vitamins to stay young. It is claimed that even though this is a lipstick, it is edible in small quantities and provides the body some much-needed Vit-D. Since the earth was submerged 50 years ago, people have been parched for Vit-D and this lipstick has it all in for you.

We spoke to the cosmetics company, Elizh and the company claims that this research can change the world. “Staying underwater has its own perks but lets admit it, we all miss that lovely bronze tan. Sunstick is the NEXT NEW THING. We are working on SunScreen, the essential lotion our grandparents remember about!!!”

Well, All I can say is the world awaits for Elizh to work its way through and give the world what it badly needs!!

SHARK ATTACKS CAUSE PANIC AMONGST CRICKETERS

The Indian Cricket Team which is visiting the famous turning underwater pitches Down Under have complained of shark attacks. There was panic in the Dressing Room as Great White’s roamed freely outside even though Cricket Australia’s Ricky Ponting assured the Indian Captain, Dr. MP. MLA. Er. CA. CS. CWA. MBA. Filmmaker. Param Vir Chakra. aka GOD Sachin Tendulkar that there was no threat inspite of the pitch running right through a shark ground.

Sachin Tendulkar, at a ripe age of 100 shows the spirit one needs int he dying game of underwater cricket. “He has been there for so long! Every title ever known to man has been given to him for his vast and rich experience. We will take his word and then face the Australians”, quoted a youngster.

This is not the first time there has been a panic among a group of people. The Great Water Hole, the worldwide phenomenon when holes appeared on the ground and the whole world was submerged, caused the Great Barrier Reef’s wildlife to spill across the country thus endangering some lives while enchanting others.

Scuba divers, now out of business are selling goggles to everyone and the BCCI has purchased 300 goggles from them to be used this series and also in future overseas matches.

The status of whether the match will go on will be known in a few days.

The Environment-Economy debate will go on. Pages will be written and workshops wasted still people will not get the point. It is inevitable. When the smell of green notes overshadows the smell of a flower or freshly showered earth, I suppose we deserve an apocalypse.

Lets just hope that we can really “invent” some of those things i mentioned above to cope with having to live underwater.

Maybe we should read about those Great Whites. I have no intentions of being devoured by one anytime soon!!!

Can you hear me Papa?? Papa Where are You? They told me you’ve gone but I don’t believe that. You can’t go. You didn’t say goodbye. I was just finishing off my exhibition in Jehangir when i got the call.

Papa, I… what happened then?? At that time?? They told me you were trying to help someone. And that you we

re carried away. Oh Papa. It isn’t fair that this should happen. You were simply helping a civilian stuck and they mistook you for Police and shot at you. Papa, I didn’t even get to see you once. I wish..wish i’d been there, to intercede, to stop it somehow, to save you. Keep you forever. Oh Papa!!!

Papa, I didn’t even get to complete my phone call the other day with you. I didnt get to tell you so much. About how my exhibition went. It was beautiful Papa. 50 Oil Paintings i made. About Darjeeling. About Kolkata. About our home. About You. It was a success. Many sold. There is a re-exhibition.

Papa. You pushed me into this even though i never wanted to give myself a chance. Where i am now is because you believed in me. Papa, I’ve got photos to show you. I did the paintings, i did the exhibition. I did paintings for corporates. I’ve been published about. I’ve got to tell you stuff. Now please come back.

Papa…I’ve even started gardening. Keeping your roses and lillies like before. They miss you too. I’ve even painted some of them. Papa your room is full of my paintings now. PLease come back na.

Papa, the whole house is filled with guests. They keep coming and giving me their sympathies while i brew tea for them. But you’re coming back. You said so yourself na papa. Then why are they here. I dont like it. All these sad people in one place poking around where its not required. You’re totally fine. I just met you yesterday.

Papa, I’m painting from home now. I’ve relocated back to Darjeeling. I frequent those tea gardens and that st

all you go to everyday. I think you’re teasing me by not coming and saying hi when you’re just around the corner.This is not fair papa. You’ve been playinh hide and seek for so long.

Papa, they think I’m mad. Just because i talk to you and i can see you. Papa but isn’t it true that you talk to me. There is so much you tell me. Everyday. About your experiences. I know you’re around coz you’ve used some of your cologne. And your clothes look fresh and pressed when you meet me.

Papa, they are taking me away to an asylum. Papa, mum agrees with them. She thinks i am mad too. They are taking me papa. where is this place….papa do something. I’m being locked in a white room. They are putting some jacket on me. Papa..Can you hear me Papa?? Papa where are you…papa this is not happening..

So the first thing we did was we climbed up the path and up ahead of the Archaeological Museum. And then when we went up and saw the whole Imperial Courtyard lined with army men!!!! In Turkey, every young man Has to join the army for atleast a year. The logic is that this will make the Men a Little (=Read LOTS) smarter and sensitive (=:P) and also develop patriotic feelings. As well as get everyone to compulsorily do community service.

What did we see?? That remains to be seen in another Story, Stay Tuned.

The Topkapi Palace gate was large and imposing. I looked back on the crumbling palaces I’d seen in my travels and wished we would care about our history as much as we cared about money. India would have a lot more visitors then for we’ve got a cultural heritage worth the envy of any country.

The gate led us to the main courtyard where we looked at the huge grounds split up into a star. We walked into a room which in Indian Palaces is commonly known as Diwan-E-Khaas (or the room where the Sultan held meetings with the priests and noblemen). In Turkey though it was called the Imperial Council.

And as we entered..whoosh!! The ceiling stunned us. Such beautiful gilded paintings and maintained so well!! Plus there were spots demarcated as to where the Sultan sat and where the Council sat. We were 4 of us sharing one audio guide and so we had to pause for a while to catch on to all the information we were being told.

The council hall has multiple entrances both from inside the palace and from the courtyard. The porch consists of multiple marble and porphyry pillars, with an ornate green and white-coloured wooden ceiling decorated with gold. The floor is covered in marble. The entrances into the hall from outside are in the rococo style, with gilded grills to admit natural light. While the pillars are earlier Ottoman style, the wall paintings and decorations are from the later rococo period. Inside, the Imperial Council building consists of three adjoining main rooms. Two of the three domed chambers of this building open into the porch and the courtyard.

We do not have many photos from what we saw in other parts of Topkapi. The reason being, we passed the Imperial Treasury, The Jewellery Room, The Ancient Relic Room.

All these rooms had items precious to the National Heritage of Turkey which is why we were not allowed to click photographs.

The Imperial Treasury contained relics from the Byzantine Age. Also there were articles of daily use by the Ottoman Sultans. The collection we see now consist of gifts of ambassadors, enthronement gifts, and purchases of the Sultans themselves.

There were shields and armours encrusted with pearls and precious stones. There were fragrance holders and goblets made of gold with rubies and emeralds. Queens would be proud of their jewellery boxes so carefully preserved.

Even the Peacock Throne of Emperor Jehangir which was stolen by Nadir Shah and lost in time, was preserved. I don’t want to be biased to India but amongst the other jewels, our Indian throne shone through. The pearls were set so carefully and evenly. It was a delight to look at it. Of course i was happy it was preserved in Turkey and not in India.

This website was one that gave excellent descriptions of the Treasury Room relics.

There is a huge line getting into this exhibit. It is a hugely popular exhibit. At the entrance of the exhibit is the Ottoman Symbol for prosperity and money. 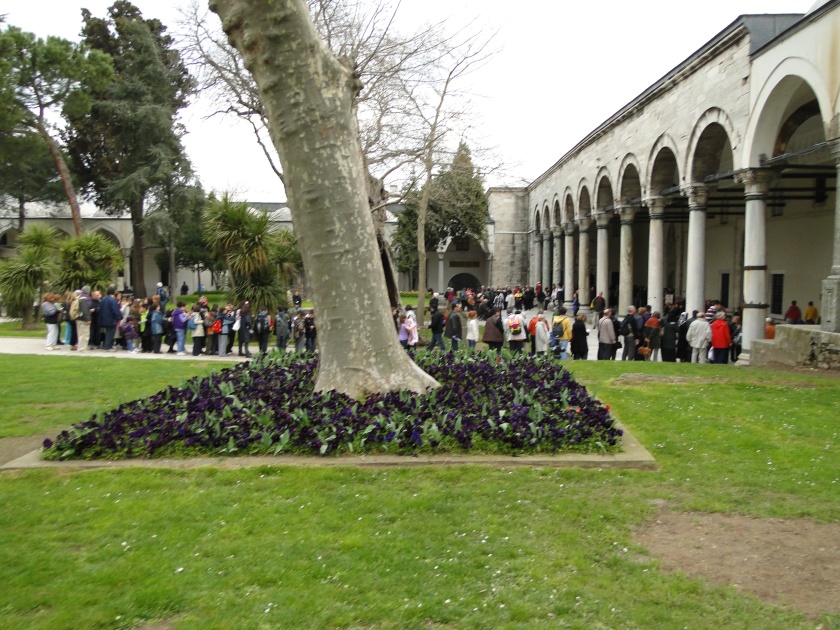 the huge rush for getting into the Treasury Exhibit

I’ve yet got the Room of Ancient Relics and other points to do. But that remains yet another part of the journey!!