18th April 2010: Mysore, Karnataka, India
My father is an active blogger and one of his friends from bloggerspace is Mr Swaroop Kagli. We made plans to meet him and take him out to lunch. After exploring the Lalita Mahal, we met him somewhere near his place and he took us to a restaurant called Olive Garden. There was a private party going on there so we had to go from another way. I wished we could sit in the private party after all we were dressed for it(=coz everyone in the party was wearing a sari n i and mum had worn some nice indian dresses). We got a nice seat and ordered some tasty starters and some yummy food. For dessert we had fried ice cream. I was not feeling well, a little drained out but the ice cream made me feel good. We ordered another one.

After lunch, we clicked photos. There were monkeys hopping here and there and creeping to see if they could get any food. There was one naughty monkey who was drinking water from the water pump on top of the kitchen. Inquiries yielded that the tank was used to supply water to the toilets and for washing utensils which was alright. Atleast it did not make it to the food.

After that we dropped Swaroop outside his building which looked swank, and then we made our way to the hotel. From Swaroop we learnt a lot about Mysore and about what he does. Swaroop has a photo blog you see so we were very interested.
Also a fact is that we take whichever place we live in for granted, because whenever anyone comes and asks us what we have to see, we usually can’t think of anything. But for visitors its a whole new experience. Through visitors eyes you see your locality or city in an entirely different view.We also visited Swaroop’s House which was a very cosy home in this fastly expanding city. There we met his mother and sister and one of his relatives who had come over. His mother had made excellent juice for us. It was nice meeting them and we enjoyed there. Sachi learnt that monkeys used to visit Swaroop’s veranda and made a request to keep one for her. She loves monkeys and wanted to keep one as a pet.
It was really nice to see that a friendship which sprung up in bloggerspace translated into a meeting and a friendship that is bound to last for years to come. Through blogs a lot of people get to know each other and its a great way to project your ideas and have discussions. Now that i have my own blog i can really relate. I’d want to travel to some place and meet up a friend from the Blog world too 😀 😀

Coming Up Next: They Mysore Palace,Goodbye Mysore

My dad and Swaroop.

12th April 2010, Karnatak Hinterland, India
I continue with the journey
Most hotels in South India and also our hotel at Kolhapur give the guests a complimentary breakfast if they stay in the hotel. As we soon discovered that, we helped ourselves to the same yet tasty breakfast of dosas,idli vada and kesaribhat. We checked out after that and made our way to our next destination,
“CLUB MAHINDRA, Kodagu Valley,Coorg”
The road from Mangalore was not a smooth one because the Govt was in the process of expansion so it was a bumpy ride. But we saw a lot of bungalows on the way. Most of the bungalows are painted in bright almost horrifying colours like bright green and baby pink but these ones were painted in stately combinations like white and navy blue, white and gray etc. 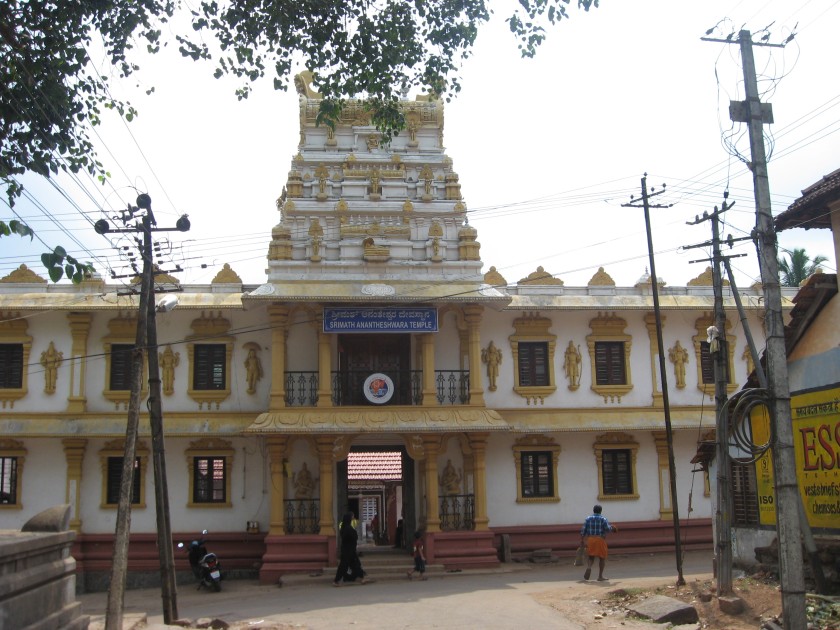 We decided to go and see the temple at Vitthal so we took a detour from NH-48 and made our way to Vitthal. The landscape was changing, more like a tropical forest types, wet with very fresh air blowing at our faces. The Vitthal Math was being renovated and the bit of the new Math we saw looked very nice. At almost all the Maths in South India, they give you sandal paste which smells totally out of the world. There was also a temple dedicated to the Naags. As you would know, Naags depict our elders who we pray to so that we have their blessings for the present and future generations. 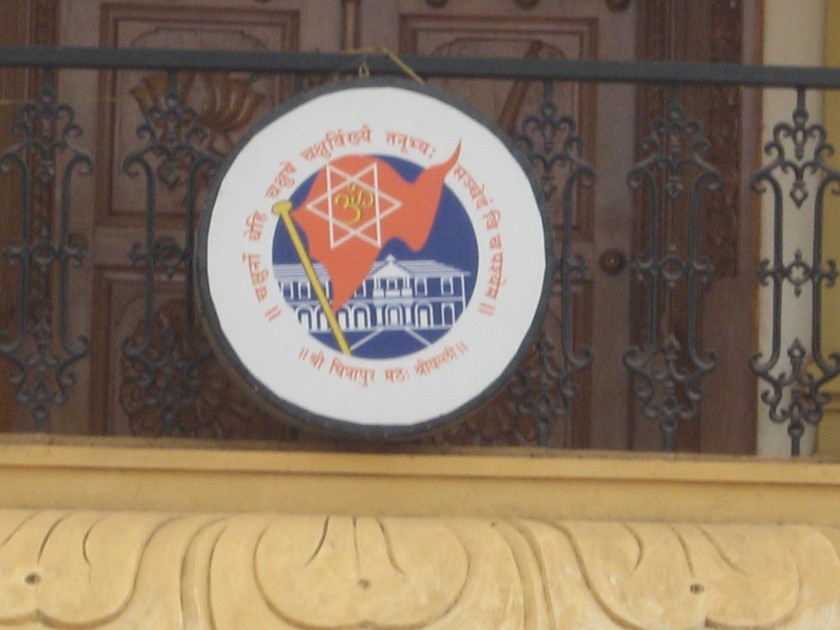 We met one of our acquaintances and we went to their house where we saw an enormous beehive. i’ve never seen a beehive so closely before and it was mesmerising…so many bees!!!

After Vitthal we made our way to Madikeri,Coorg. Coorg is actually the name of the district. Its very famous for spices so we’ve heard. While leaving Vitthal, we were stuck in a traffic jam and we could only make our way out of it because Vitthal unlike Mumbai, does not have any open drains!!!

Our first halt was at a place called Shuliya and we kept asking for that whenever we met people. The people in South India are generally quite knowledgeable they know routes to explore entire karnatak at the back of their minds!! quite an amazing feat!!

A special encounter:
At Shuliya, we encountered Karnatak’s biggest specialit, “Gobhi Manchurian” which could be found in every Nukkad and gully of Karnatak. The journey to Shuliya was uneventful, except that the road was winding and made veryscenic landscape because it was so lush and green!!
By the time we reached Shuliya, we could feel the heat beat down on us ..it was noon. So we stopped at Hotel Surabhi. Let me tell you, this place looks small but the food is totally awesome and very tasty. Here we tasted the famous ‘Gadbag’ and ‘Gobhi Manchurian’ both extremely delicious.

After lunch, we made our way to Club Mahindra. There were more and more plantations and lots of nurseries selling rubber spalings. A lot of areca nut trees and pepper creepers on them. It was pleasant to watch. Also i notcied right from Shuliya onwards, lot of stalls selling ‘Neera’, a drink from which toddy is derived, and that almost all street lights had solar panels on them, which was very nice to see that atleast our rural counterparts were making an effort to be environment friendly.

As we approached Coorg, the scenery was breathtaking. Lush green forests and the constant chirping of birds and c\insects. It was out of this world.!!
Also we passed a lot of estates with the home stay options available. Small cottages looked very inviting. we even stopped the car for some time to take in the environment. We passed a road which led to the ‘Indian Institute of Spices’ and then made our way to club mahindra. Here also in this small town of Madikeri,all street lights had solar panels and trust me at night, they glowed brighter than the other thermal electricity powered lights.

We made our way slowly, not before we passed a JM Financial (work follows my dad here as well!!!) and then drove into the resort. All Club Mahindra properties are huge and excellently done up. After resting in our room, we made our way to the Conference Room where they had a presentation for us to explain the facilities at the resort and also to explain the tourist sites around. It was followed up with some Coorgi coffee!!

Me!! at the hotel at Shuliya 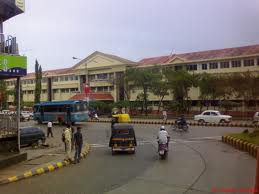 Driving down to Mangalore was not filled with excitement as the other places as the scenery was much like as if we were driving in and around Mumbai, filled with industries. Mangalore is a busy port city of Karnatak so there were a lot of factories and facilities for unloading goods. Mangalore’s port handles 75% of India’s coffee exports and the bulk of the nation’s cashew exports. Sinche Mangalore was just a halt, we didnt explore around much.

Discovery: Karnataka is dotted with bakeries called ‘Iyengar Bakeries’ which

have a different letter to the start like’L.V Iyengar Bakery’ or ‘Madhu Iyengar Bakeries’. you get a lot of snacks here as well as sweets but not many confectionery items so its not a usual bakery.

Hotel: Kumar’s International
Location: Close to the market but can be difficult to find unless you know your way around. 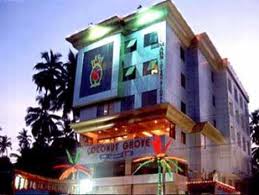 After resting for a while and a steaming cup of tea, we left to explore the market. We had an option of taking a rickshaw or an innova so we opted for 2 rickshaws. our first destination was Mangalore Math.

We had to look out for the Math and that took a while but we eventually found it. Its in such a cosy spot, it doesn’t look like a Math. But we found out later, that we had entered through the back gate which is why it didn’t look like a Math. Here also we had a pooja and we prayed at the Samadhi of one of our Swamijis. We found out that the bhatmam here was the elder brother of hemant bhatmam.
The idol of Lord Krishna at the Math is beautiful!!

After the Math, we decided to explore the market. we went to see shops but it being a sunday and Mangalore being a sleepy city, shops were closed on sunday. Most of the stuff was the stuff that you find in Mumbai so we gave all of that a miss. Originally we planned on seeing a few saree shops but all of them were closed. finally we went to a jewellery store called ‘Alukkas’ and looked at the jewellery there. most of it was so fancy and heavy that we were put off. Finally we settled for a pair of bangles ‘which look thin when seen from one angle and thick from the other angle.

After our purchase (we got a bag, 2 complimentary purses, shopping bags etc) we left to have dinner at ‘Taj Mahal’ which Sanjay Mam had recommended to us. There we waited for a while because there was a queue for seats and then had south indian thalis. Thalis are so wholesome, and just right so you can taste everything. The tomato soup we got along with the thali was excellent.

After dinner, we took 2 rickshaws to our hotel. The rickshaw took us from a different winding route which was nice because the weather was pleasant at night. After watching a bit of IPL, we slept

Coming UP Next Vitthal and the journey to Coorg